The Macedonian front, also known as the Salonica Front (after Thessaloniki), or as Balkan Front, was a military theatre of World War I formed as a result of a war of the Allied Powers France, Britain, Ireland, Serbia, Greece, in the fall of 1915, against the combined attack of Germany, Austria-Hungary, and Bulgaria. The front was established running from the Albanian Adriatic coast to Struma River, pitting a multinational Allied force against the Bulgarian Army, supported by smaller units from the other Central Powers. The Macedonian Front remained quite stable, despite local actions, until the great Allied offensive in September 1918, which resulted in the capitulation of Bulgaria. On the site of the present territory of N. Macedonia, 60,000 Bulgarians and Germans were killed, wounded, or captured. The Allies suffered 50,000 battle casualties, but another 80,000 men died or were evacuated due to sickness. Many of them were of Macedonian origin.

Welcoming you at Skopje Airport. Today, after the accommodation, first we take you on a walking tour starting from the French World War I cemetery built in 1926 to commemorate 2,930 soldiers from France and its colonies, including Morocco and Senegal, and only 930 of them were identified. Commemorations at the cemetery traditionally take place on 14 July, the French National Day and on 11 November, the date of signature of the armistice that ended the World War I. We continue to the old Kale – Skopje fortress, and then to the Old Turkish Bazaar, where we visit the Military Museum of Macedonia that follows the centuries old history of wars in this region. Next, we visit the Museum of Macedonian Struggle for Sovereignty and Independence, covering WWI and the department of the victims of the communist regime. We walk across the Stone Bridge, the landmark of the city, and admire the monument and fountain of Alexander the Great. The next stop will be the memorial house of Mother Teresa (she was born in Skopje in 1910). Welcoming dinner.

In the morning we start with some of the natural attractions in Macedonia, and we are getting to one of the most beautiful canyons in Europe, Matka, with its river Treska. We will first have small boats ride 6 km upstream to visit the cave Vrelo, full of natural cave decorations. Free time in the canyon for individual activities. In the afternoon we drive on to the neighboring town Tetovo to visit the 15th century Painted Mosque, painted in a unique way in the 19th century. The site used to include an Inn as well as a bathhouse on the other side of the river. Abdurrahman Pasha, a great enthusiast of art who was fond of Tetovo, reconstructed the mosque in 1833. In the early evening, we will reach our today’s destination. The final destination today is Ohrid (a UNESCO enlisted natural and cultural town and lake). After the check in to the hotel, we start a walking tour through the old city of Ohrid, with traces of four thousand years of civilization. We will visit the ancient Macedonian-Roman theatre, and famous medieval churches – St. Sophia cathedral, Holly Mother of God Perivleptos, and St. John the Evangelist at Kaneo, from where by small boats we get back to the city center. Tonight we have organized dinner in a national restaurant. Overnight in a hotel in Ohrid.

We leave Ohrid after breakfast, heading to the National park and mountain of Galitchitsa. On the way, we stop to visit the unique prehistoric settlement on water from the Bronze Age, called Museum on water or Bay of bones. Then we drive up almost to the top of the mountain to admire nature from a few viewpoints. Here we start exploring the first visible traces of World War I. We take 2-3 hours hike to follow the tranches and improvised bunkers, drilled in the lime-stone, to remind us of the front line and battles that took place here. On the other side of the National park, we will have another stop to view Lake Prespa with hundreds of species of birds, pelicans, and cormorants among them. Then we drive to the town of Bitola to explore the Ottoman market, Yeni Mosque, the Clock Tower, and the wide alley. Dinner and overnight in Bitola.

After breakfast, we visit to once military academy, a place where Mustafa Kemal Ataturk, the father of modern Turkey, finished his military high school, today a museum and memorial room of Ataturk. Bitola has always been an administrative, cultural, commercial, and educational center in the region. As many European countries had consulates in Bitola, this town was commonly known as the City of The Consuls for centuries. But during World War I, Bitola was one of the most strategic places in the Macedonian front line and one of the most bombarded towns in the world. In this town, we visit the French cemetery containing the graves of between 13,262 and 16,262 French soldiers (of which 6,262 in individual graves) who were killed in World War I. Then we visit the German cemetery, of 3,406 fallen German soldiers in WWI. In the afternoon we drive to the National Park Pelister to see the remaining tranches and to follow the WWI trail, well marked with many places for rest, sightseeing, and informative educational panels. Tonight we enjoy dinner in some of the central restaurants. Overnight in Bitola.

Today we drive a 4×4 vehicle to the rural area of Mariovo, following an old military road used for transportation of ammunition and thousands of soldiers to the battle line. For the locals who live here, even the new generations, a synonym for war remains WWI. Along the trip, the terrain will vary from deep forest to desert-like places, from valleys to mountains, from inhabited to totally deserted villages. We will also have an opportunity to get a small hike to one of the most beautiful old stone bridges in this region and visit the old water-mill near the bridge. We will also witness the rural way of living in Mariovo’s villages that are characterized by the unique architecture of the houses, built only with natural materials like stones, mud, and timbering. Here, optionally, we can taste homemade bread, sheep cheese, honey, dry meat, fresh salad, and fruits authentic to this region. Back to Bitola and overnight.

From Bitola, we head to Dojran, practically following the front line. Dojran and its surrounding was a place where one of the most violent battles of the Macedonian Front took place during World War I. The British army has tried to break through the positions of their opponents several times. The Greek and Irish military cemeteries in Rabrovo, and the damage to the St. Ilija's church in Star Dojran testify to the violence of the battles. Near Dojran, in Kala Tepe, trenches and shelters can still be found. During the battles, the population of Dojran was forced to leave. On several occasions, the city was burned down by British artillery. We stop at the Greek cemetery where 118 Greek soldiers died during the breakthrough of the Macedonian Front in September 1918 and buried in the Greek cemetery of Valandovo. Just a few meters away we can see the Irish military cemetery and the grave of the soldiers who were part of the 10th Irish division.  Following a 4 km land trail, on foot, we next visit Kala Tepe, close to Dojran, on an altitude of 611 meters. From there, the Bulgarian army was conducting its strategic military operations. Dinner and overnight in Dojran.

We leave Macedonia and cross the border with Greece, heading to Thessaloniki. Just after the border, we make a stop in Polykastro to visit WWI cemetery with a little over 1,000 graves of British soldiers who died from 1915 to 1918. After the check-in to our hotel, today we explore the port of Thessaloniki which is over 2,000 years old, and the White Tower, which has become a symbol of the city. In the afternoon we visit the Lembet Road cemetery, the resting place of over 1,600 commonwealth servicemen as well as burials of French, Serbian, Italian, and Bulgarian troops. Free afternoon to explore the city on your own and farewell dinner in a Greek restaurant with traditional Greek music.

Breakfast and transfer to the airport of Thessaloniki. 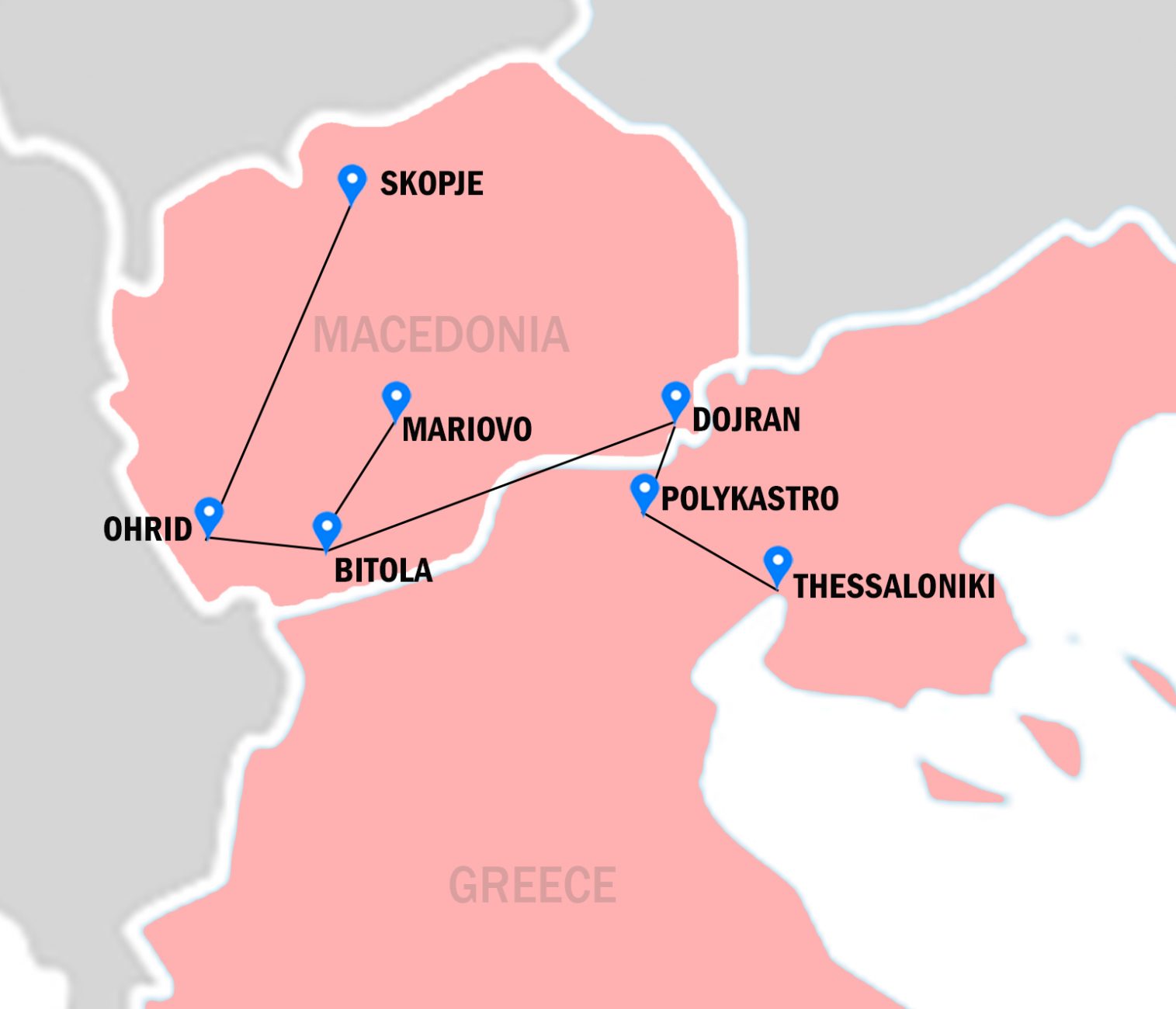 Services for the tour