The Holy Mother of God – Peribleptos

The Holy Mother of God – Peribleptos in Ohrid

The Holy Mother of God –  Peribleptos church is located in the old part of the city of Ohrid, near the Upper Gate. It is dedicated to the Holy Mother of Peribleptos, meaning “conspicuous” or “who watches over all”.  The extraordinary typical Byzantine architecture and the stunning wall paintings make this church significant medieval monument in Macedonia. It was built in 1295 by the Byzantine military commander Progon Zgur, which was the relative of the Byzantine Emperor Andronicus II Paleologus. The fresco painting in this church represents some of the first works of the most prestigious medieval painters Michael and Eutychios. Their dramatic expressiveness was the basis of the new trend in Byzantine art from this epoch, called “The Renaissance of the Paleologues”, which was the last chapter of the Byzantine art. On the walls of this church, with an extraordinary vitality, power and obvious emotions, they have painted scenes from the life of the Mother of God and Jesus Christ. Here, the art of Michael and Eutychios fundamentally changed the visual conception of the world, introducing new ideals for citizens and modest religious people. They painted 10 ten cycles of frescoes in the altar, nave and narthex. Inside the church, they painted one of the richest cycle of frescoes in the whole Byzantine world, dedicated to the life of the mother of God. Also, this church has the largest number of preserved signatures of the two artists Michael and Eutychios, hidden in the frescoes. At the end of the 15th century, Ohrid and Macedonia became part of the Ottoman Empire. The Ottomans destroyed many churches in Ohrid, or converted them into mosques. One of the churches being destroyed, was the church of St. Clement on the Plaoshnik settlement. The relics of one of the most important Slav saints – St. Clement, were brought to this church. Since then, the citizens of Ohrid named this church St. Clement. Relics of Saint Clement staid in this church more than 5 (five) centuries, until 2002, when they were brought back to the new built church of St. Clement and Pantheleymon, built under the ruins of the original church from the 9th century. Furthermore, when the cathedral church of “St. Sofija” in Ohrid was converted into a mosque, the church “Mother of God – Peribleptos” became the seat of the Ohrid archbishop, which managed to retain its power, and even gain new territories. Then, the large monastery complex, the archbishop palace and the great archbishopric library, was built around the church. Under the rule of the Ottomans, mostly all the churches on the Balkan Peninsula (and the churches in Malta and Sicily), were under the jurisdiction of this archbishop. Inside the church, you can also see a small collection of black and white photographs showing how Ohrid looked like during the Ottoman period. Inside, you can also see fragments of the Early Christian basilica from the 5th century, over which the present church is built. We can mention that mostly all of the churches in Ohrid from the medieval period were built under the ruins of the early Christian basilicas from the 4th up to the 6th century. There is an interesting story about the Bell Tower next to the church. The Bell Tower is a donation from Mihaijlo Pupin, a well-known innovator and scientist. He is known for numerous patents, winner of Pulitzer price, and a member of many American scientific and technical institutions and universities. In 1923, he donated the bell, which weighed 3 (three) tons and in that time, it was the biggest bell in the Balkans. Mihajlo dedicated the bell and the Bell Tower to St. Clement. Behind the church are the graves of one of the most important Macedonian writers – Grigor Prlichev, and his son Cyril Prlichev, popular Macedonian revolutionary, teacher, writer and journalist. 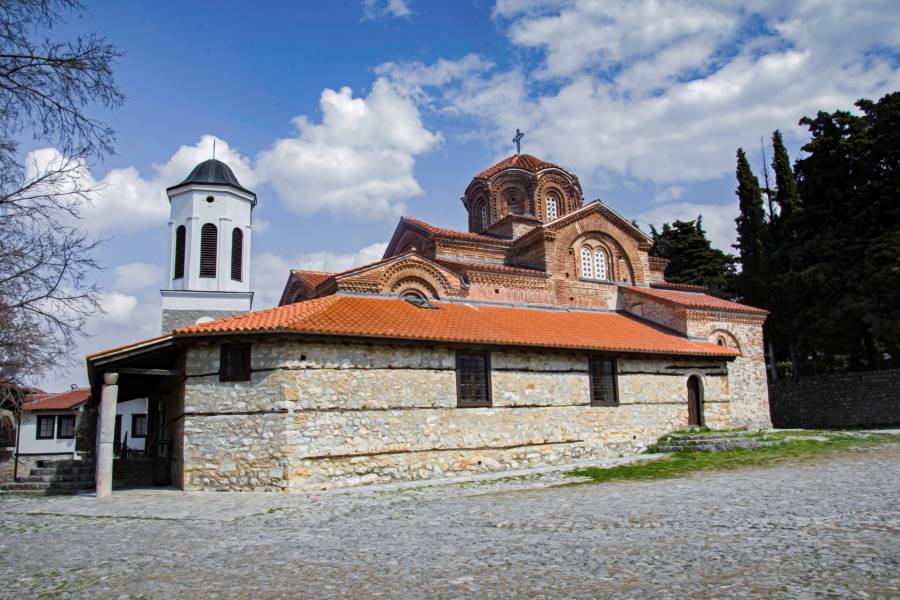 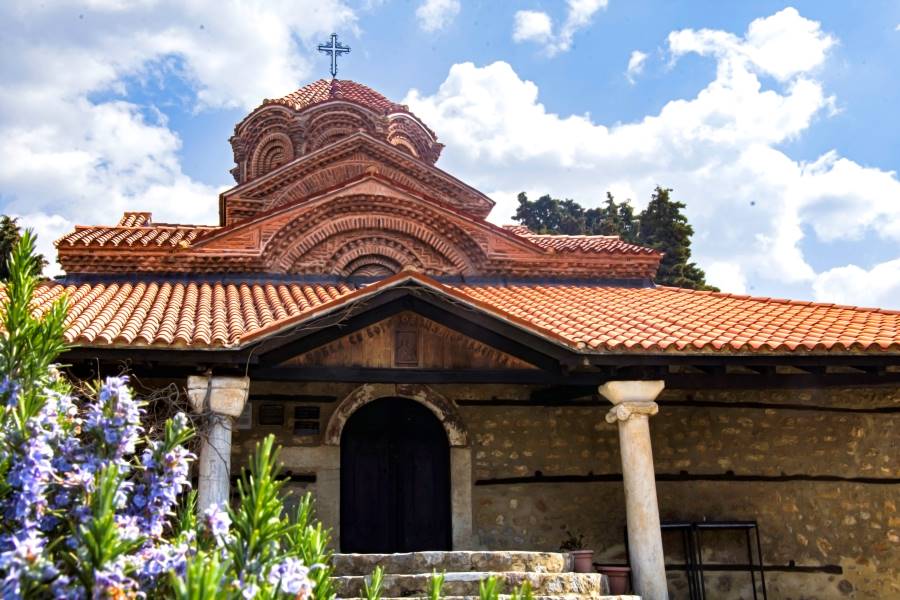