Saint Naum Monastery is located by the shores of the Ohrid Lake, 29 km from the city, and only 1 km from the Albanian border. Saint Naum was among the disciples of the Saints Cyril and Methodius. The last great mission of the Saints Cyril and Methodius and their disciples for spreading the Slavic literacy was in Moravia (today Czech Republic). After the death of Cyril and Methodius, their disciples were expelled and put in prison by German cleric who opposed to creating Slavic liturgy. Saint Naum first went to Preslav in Bulgaria, where he founded the Preslav literacy school. In 893, Saint Naum went to Ohrid, where he together with Saint Clement, opened the first university in Europe on the Plaoshnik settlement on the hills of Ohrid. There they educated more than 3500 students, who later will spread through all Slavic countries and will continue to spread Slavic literacy and the alphabet. In the year 900, far from Ohrid on one of the most beautiful places of the Ohrid lake, Saint Naum built his own monastery. The original church which was built by Saint Naum was dedicated to the Holy Archangels, but for unknown reasons was destroyed. Today’s church is from the 17th century, but inside the church is the grave of St. Naum from the original church together with some fragments which date back from the start of the 10th century. One of those fragments which are from the first church are two marble columns; the inscriptions on the columns are the oldest epigraphic evidence of Slavic literacy. Saint Naum throughout his life made miracles, he healed many people. Many people were also healed by praying on the grave of Saint Naum. On the chapel of the church where the grave of Saint Naum is placed, the miracles of Saint Naum are painted. The central place of the Saint Naum Monastery complex is the church of “Saint Naum”, around the church is a hotel and a restaurant. This place also offers breath-taking views of the Ohrid Lake.  The entire monastic complex is complemented by the magnificent beauty of the peacocks; these birds symbolize immortality and are the symbol of this monastery. For people from Macedonia, especially from Ohrid, St. Naum and St. Clement are the most important saints. They were the first Slavic saints, and because during their lifetime, they made plenty of miracles and helped many people, shortly after their deaths they are canonized as saints. 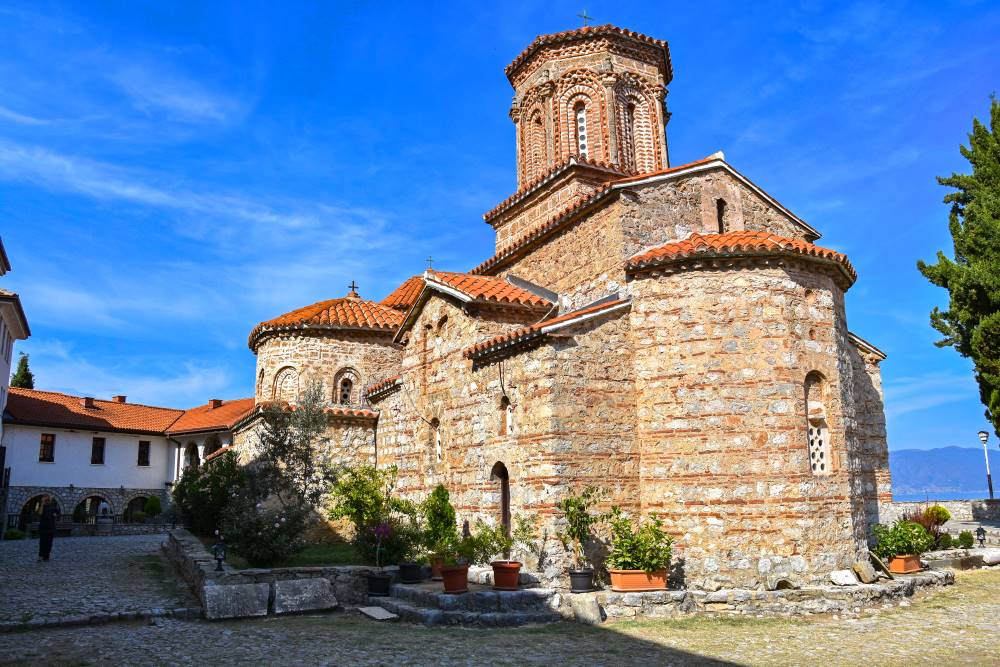 Churches in the monastery complex

Except for the church of “Saint Naum”, around the Saint Naum Monastery are located several other churches. Next to the “St. Naum” church, there is a church that is dedicated to the Sts. Cyril and Methodius. This is a new church with new frescoes, and here on these frescoes, you can see scenes of the lives of the Sts. Cyril and Methodius and their main disciples – St. Naum and St.Clement. Another church in the monastery complex is the church dedicated to St. Petka, and on the backside of this church are the springs with holy water.

Close to the Saint Naum Monastery are placed the most beautiful springs in Macedonia. The springs form a small lake with their crystal clear water, the temperature of the water is usually from 10 to 12 degrees, and the maximum depth is 3.5 meters. The water from the spring later goes into the Ohrid lake. The restaurants and private boatmen offer tours by small boats through the crystal clear lake formed by the springs. 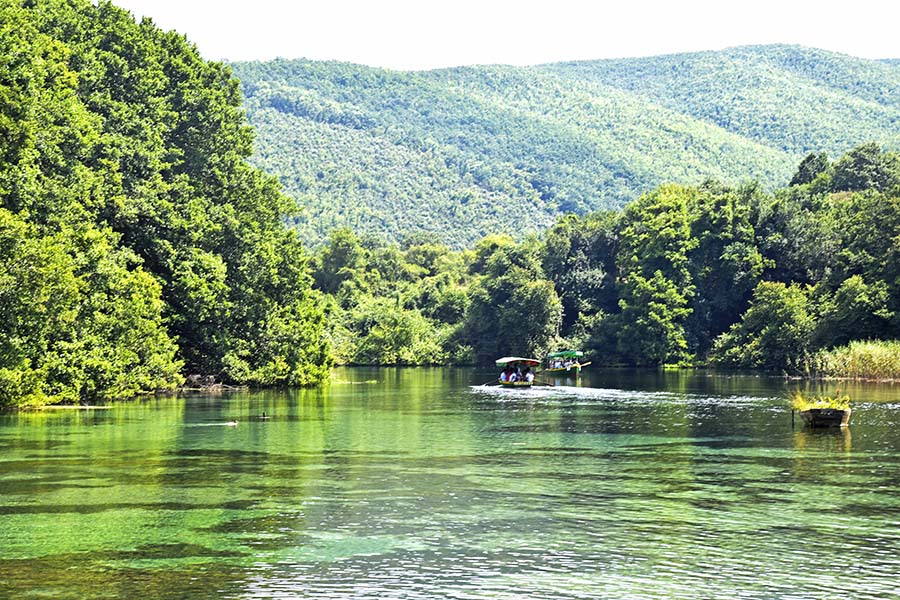 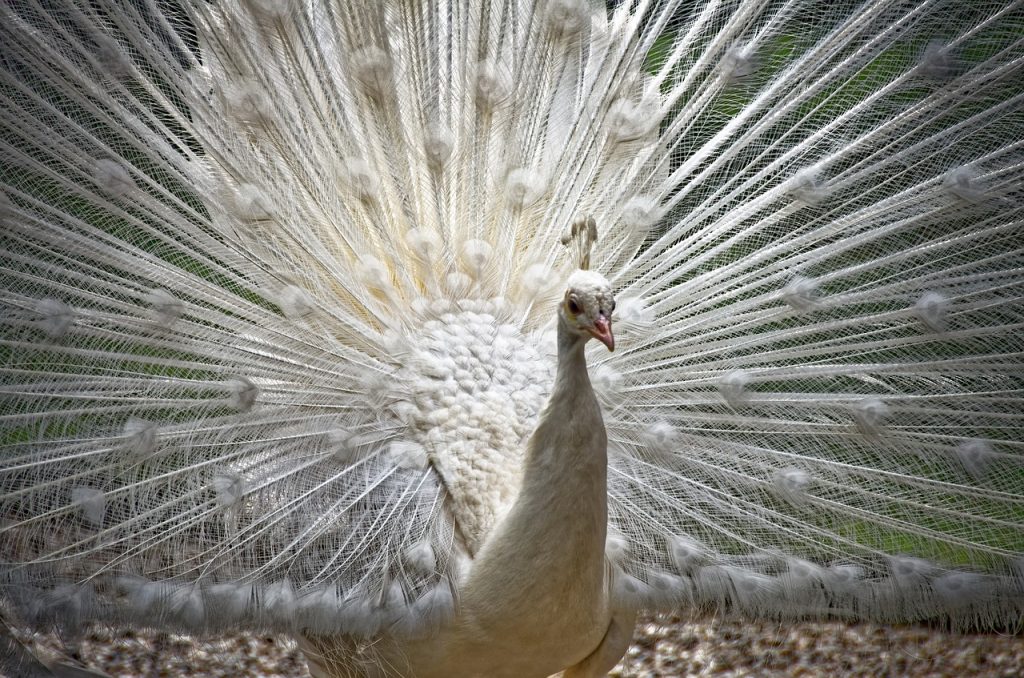 Peacocks are the symbol of the Saint Naum monastery, there are many peacocks around the monastery complex if you are lucky you can see the two albino peacocks, which are a present to the monastery from the ZOO in Belgrade

The sculpture was made by Boris Dzeparoski in 2005 on existing tree close to the entrance of the monastery. It was made with a chainsaw for only 15 hours. Behind the sculpture, you can see pictures of the work process 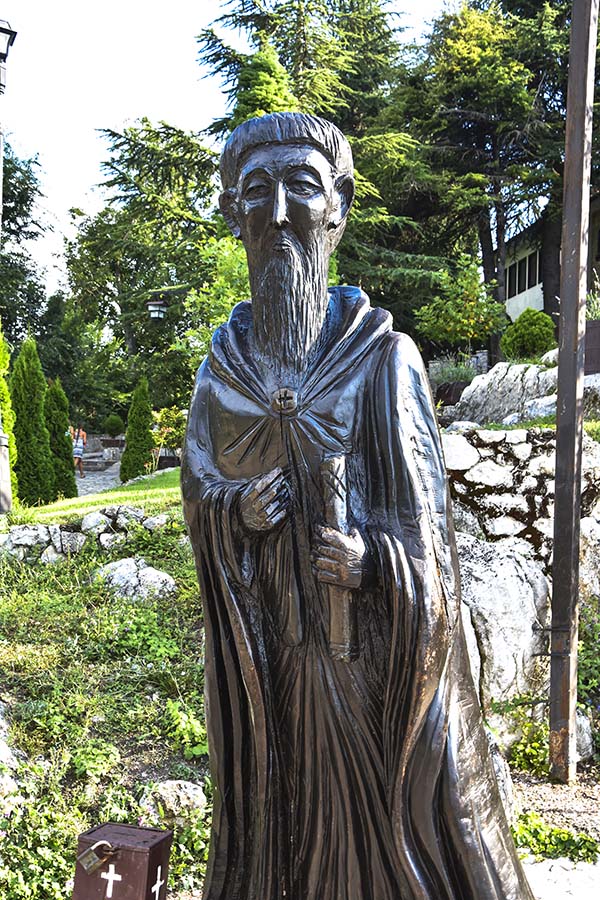